Panipuri,whether you call it पानीपूरी or Gol gappa in Hindi‎, pani ke bataashe in Urdu, पाणीपुरी in Marathi or પાણી પુરી in Gujarati; this dish is sure to remind you of one of the streets of India! It is sold as Panipuri in Western India, Phuchka in Bengal, GupChup in Orissa and Chhatisgarh and Pakodi in several parts of Kutch.

Panipuri; as the name suggests, consists of 'puri', a fried crisp sphere stuffed with a mixture of flavored water, 'pani' along with tamarind chutney and a salty mixture of potato, mung beans, chickpeas and black gram beans.

One of the unfortunate things of living away from India is the lack of getting the same taste in chaat as in India. The closest we could get to the taste of Indian Panipuri was making it at home! 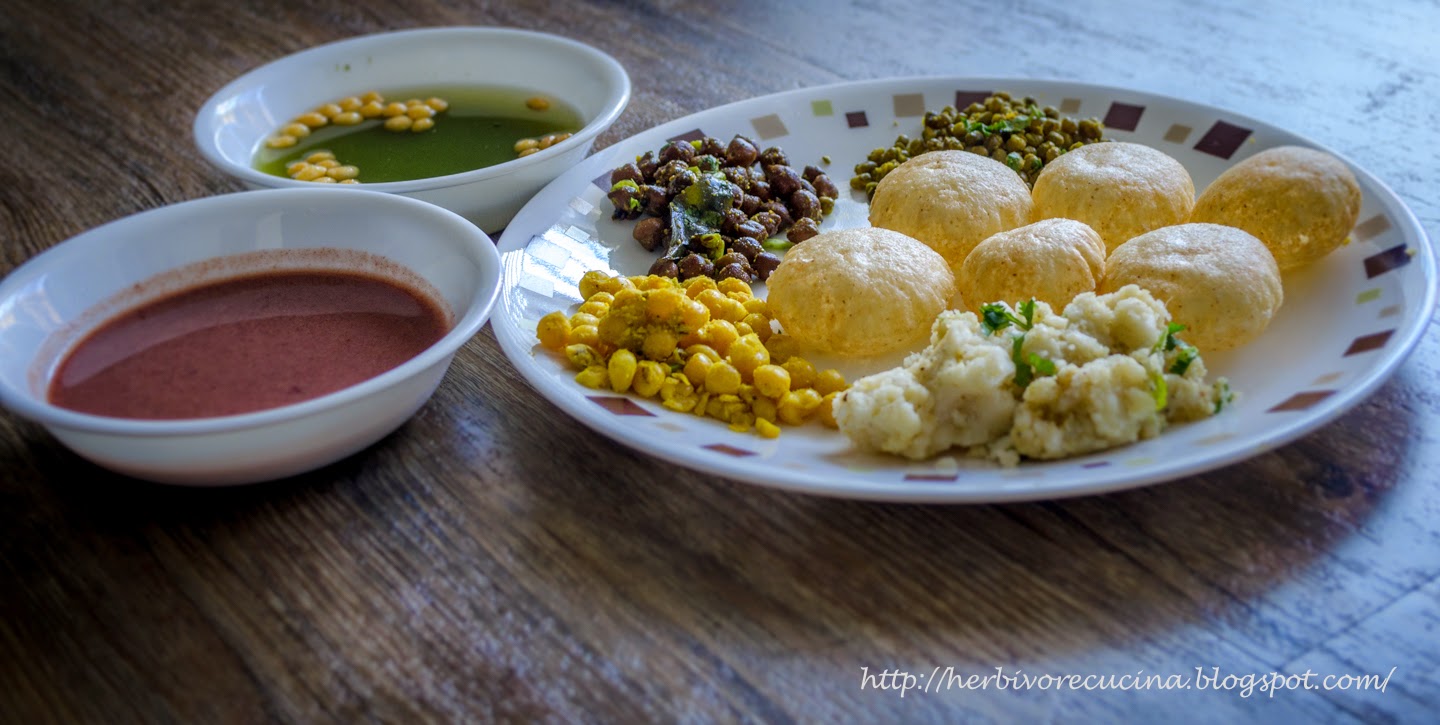 Take 2 cups of mint leaves, 1 cup of cilantro leaves, 1 cup of chopped green chillies, 2 inch piece of ginger. Add 2 tbsp. of cumin seeds, salt and lime juice. Mix 4 cups of water and let the mixture soak for a few hours. After the mixture is soaked, sieve the water and keep aside. Grind the mixture into a smooth paste, using water from the water that is kept aside. Mix rocksalt and lemon juice if required. The spicy mint pani is ready for the panipuri. 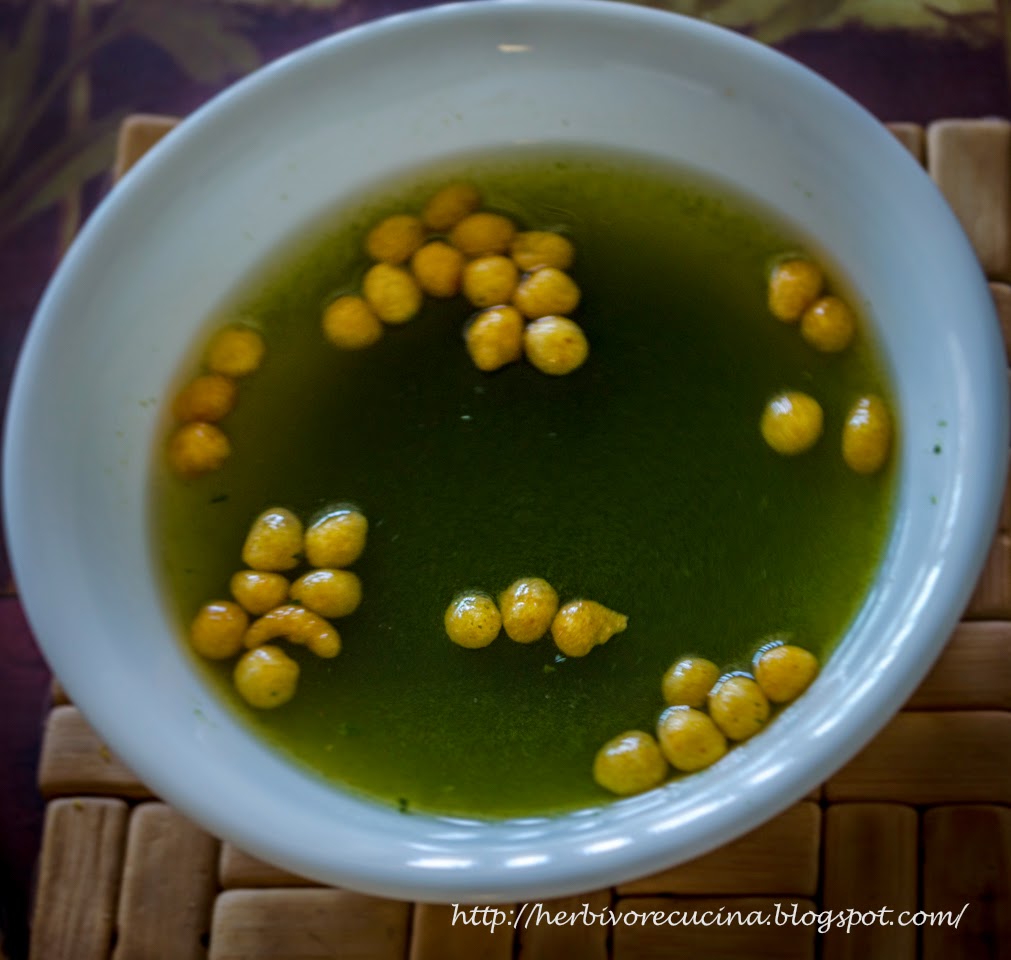 Take 2 cups of dates, with pits removed. Mix with 1 cup of tamarind, half cup jaggery, a pinch of cumin seeds and 2 cups of water. Pressure cook the mixture till 3-4 whistles or till the mixture is cooked. Cool the mixture, and make a thick paste. Add Chat Masala and ground Roasted Cumin powder. This can be stored for several days by freezing the mixture. 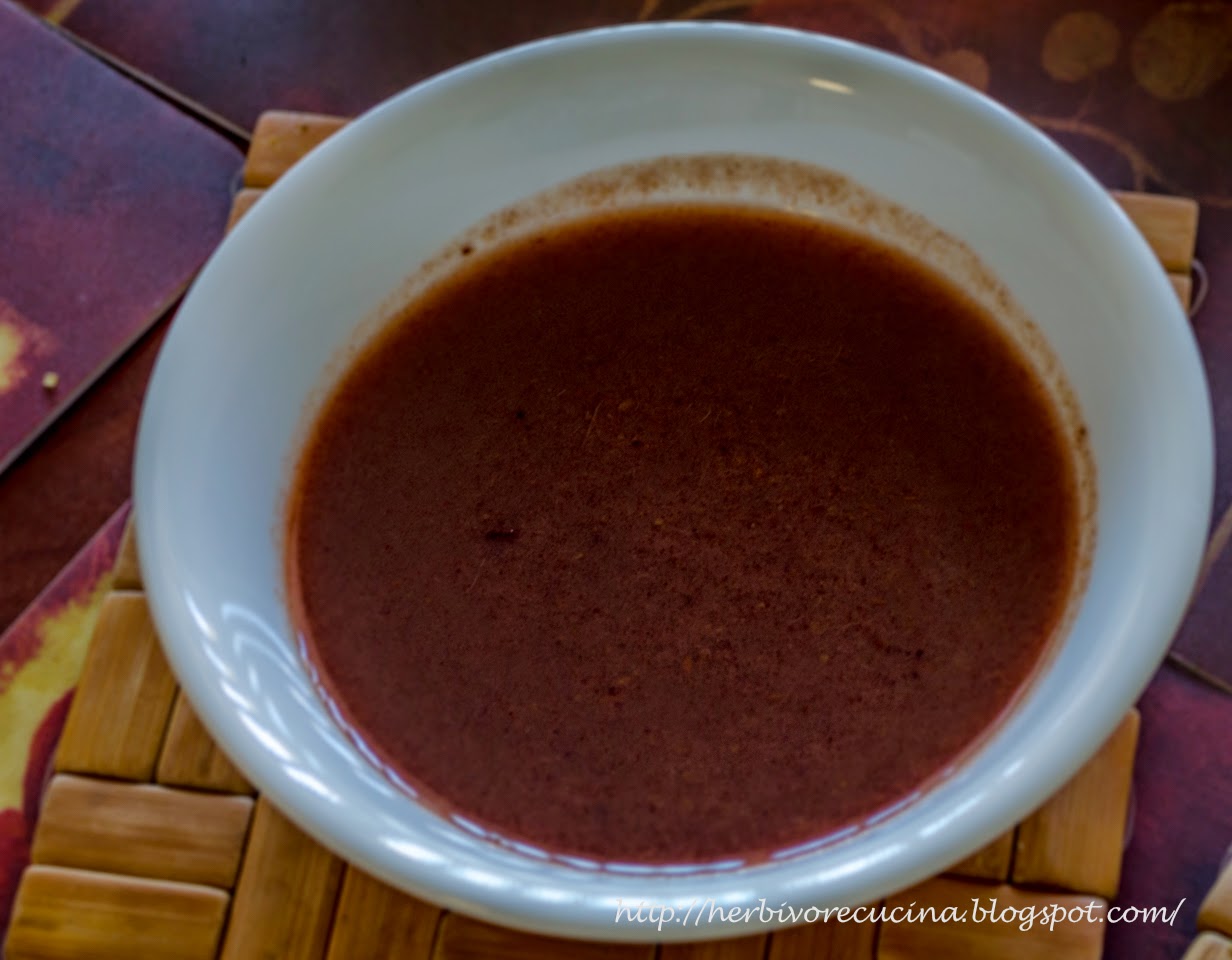 In a pressure cooker, add 2-3 potatoes cut into pieces and a little salt.cook them till 2-3 whistles. Peel the potatoes, cool them, and mash them. Add cilantro, cut green chillies, lime juice, Chaat Masala and ground roasted cumin seeds to the mixture.

Next, boil the Mung beans in the pressure cooker with a pinch of salt, and cool them. Remove excess water. Add little oil in the skillet, put mustard seeds in it, followed by cumin and curry leaves. Add the mung beans, salt, rocksalt, lime juice, turmeric powder and cilantro.

Repeat the same for Chickpeas and black Gram beans and the ingredients for the panipuri are ready!

Add boondi to the pani, and keep all the ingredients in a plate. To make a serving, take a puri, make a hole on one side of the puri. Stuff the fillings in, followed by the sweet dates-tamarind chutney and spicy pani.

The street vendors in Mumbai give six puris in one plate of Panipuri, but the dish is so tempting that no one can eat just one!! 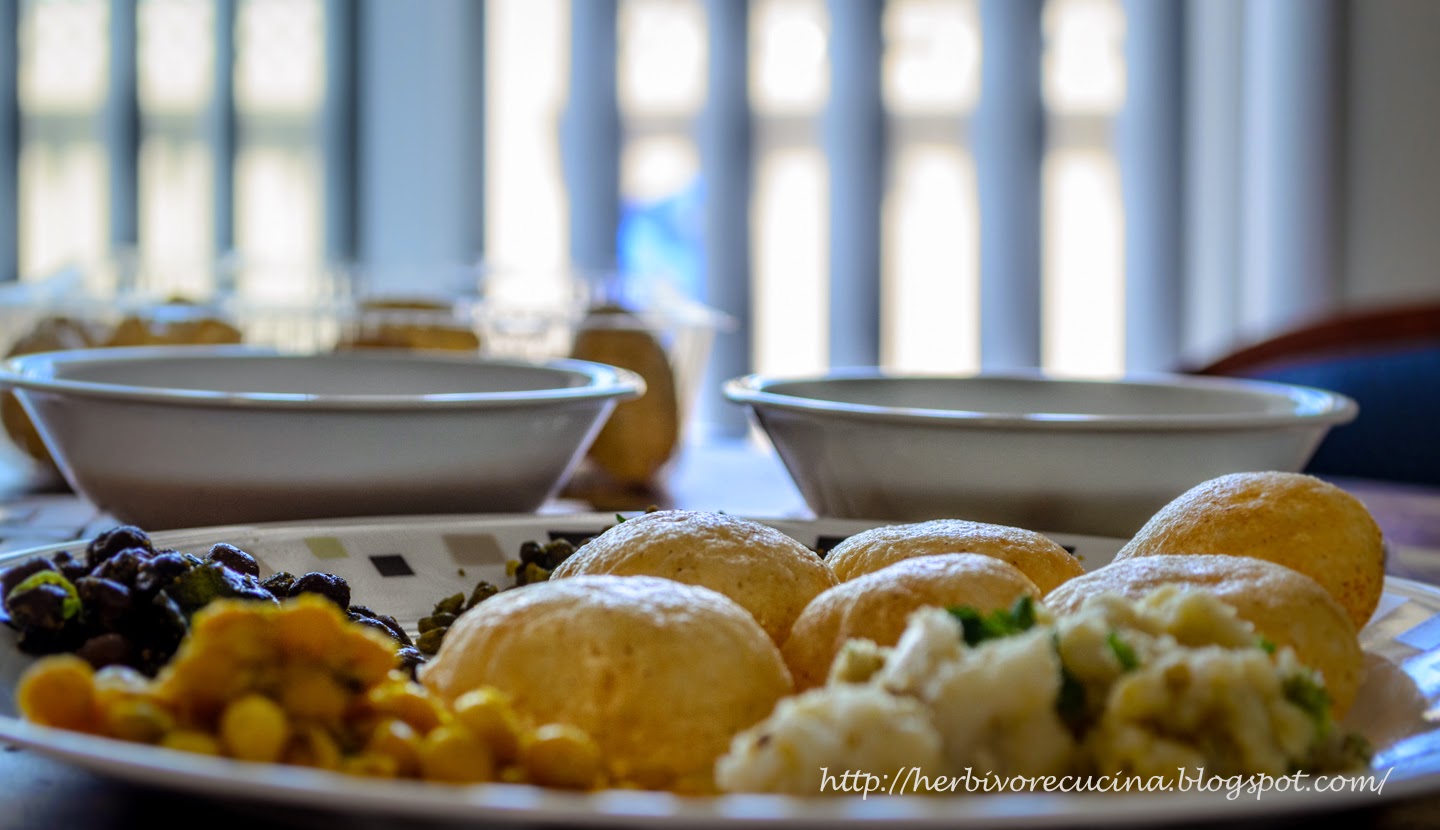 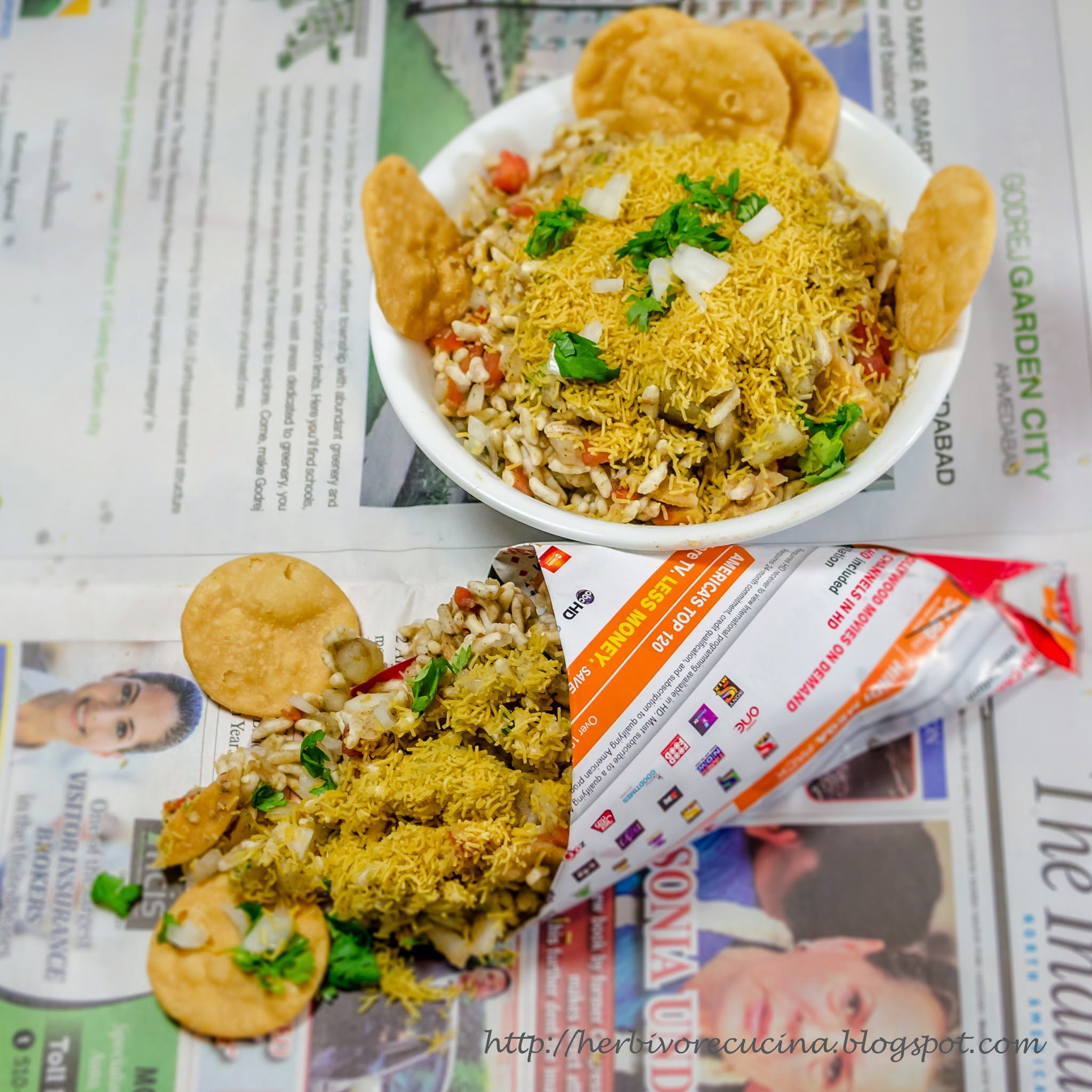