A blend of flattened rice flakes, potatoes and spices, Batata Poha is a popular  and delicious breakfast that comes together in minutes!

Days that start with wholesome and delicious breakfast are the best! Poha is one such recipe that we LOVE at home. Plus, it is the easiest to put on the table within a few minutes. Every week we have poha atleast once. With a few changes in the ingredients and toppings, it always feels like it is a new dish!

An easy to make breakfast or light meal, poha is a popular dish from the states of Maharashtra and Gujarat in India. Named after the main ingredient in it, poha is an easy to find Indian ingredient made from flattened rice.

Poha can be made in various ways with a lot of add-ins and different garnishes. You can add mixed vegetables in it or top it with pomegranate seeds and sev or enjoy it without anything added to it.

Every region has their own variation to the dish and families have their recipes that they swear by. While the Maharashtrian version has some shredded coconut added to the poha, people from Gujarat enjoy their version with a pinch of sugar added to the poha. Whichever region you pick from, Poha is popular and made quite often in households! 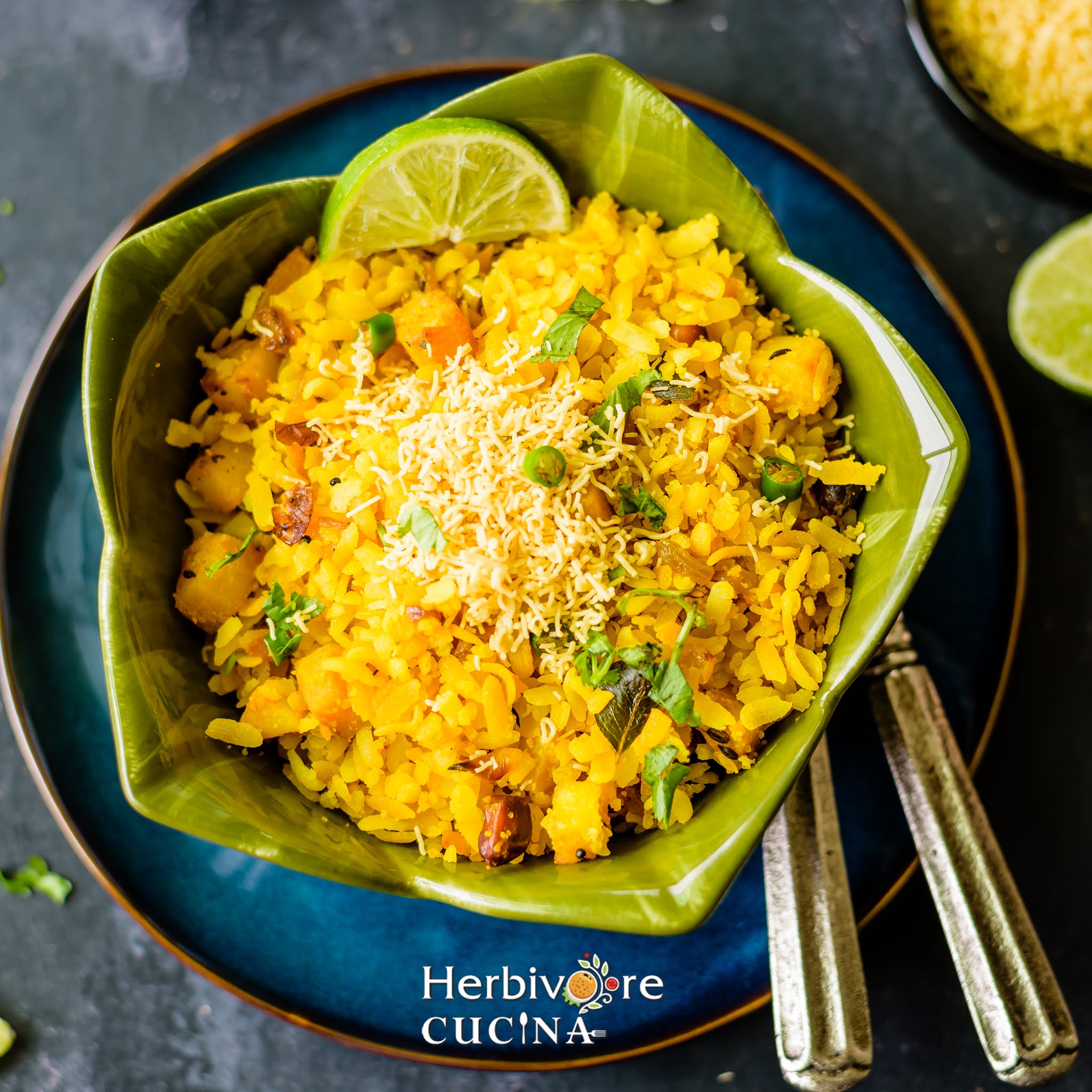 Tips to make the BEST Poha

While this recipe needs only a handful of ingredients and a few minutes to bring it all together, a lot of folks often complain of mushy or tasteless poha. With just a couple of things to closely follow you can easily avoid the mess and make a delightful snack or meal very easily.

First, pick the right kind of poha. There are various types of poha available in all Indian stores. From the different kinds, using the thick variety is the best. The thin ones tend to get mushy so avoid them.

Once you have the right kind of poha, rinse them in a colander using cold water. Soaking them in water or using hot water will result in a mess. Make sure this is done first, as the poha will have some time to drain completely while preparing the remaining ingredients.

The recipe calls for potatoes and onions. Chop them to pieces of equal size so they cook evenly. Do not used boiled potatoes as they tend to mush up while cooking. Cook them directly in the pan so they remain firm. 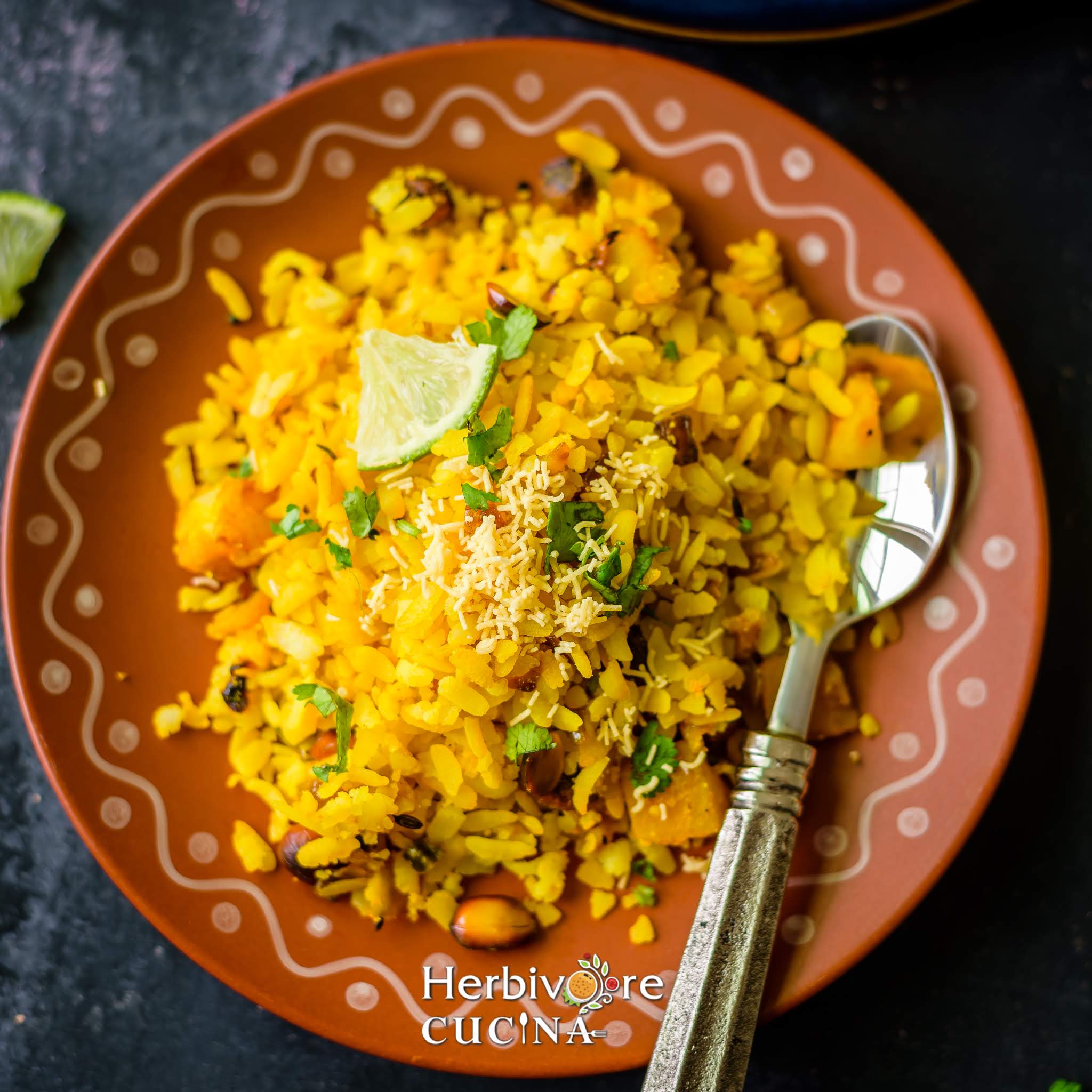 I have used regular poha for the recipe. However, these days there are a ton of options like poha made from red rice,

In this recipe I have used peanuts, onions and potatoes. However, the peanuts can be skipped if need the recipe to be nut-free. Besides, using either potatoes or onions is a great idea too. These variations are popular to make as they taste different but are equally quick to make.

Adding vegetables like carrots, french beans, corn and peppers is a great idea too. Also known as Masala Poha, this vegetable laded version is flavorful and tasty.

I have used green chili in the recipe. However, if you are not a fan of green chilis, switch that to red chili powder. Though the taste is different, this variation does work well.

How to serve Poha?

As I mentioned above, poha tastes great with some toppings. The toppings of the dish vary from recipe to recipe. Adding pomegranate seeds, chopped cilantro and fried chickpea noodles (sev) is popular. Plus, adding shredded coconut works well too.

Given that poha is a great breakfast recipe, we mostly enjoy it with a cup of piping hot Masala Chai. One of my favorite breakfast places serves poha and chai with another Gujarati favorite, Khaman Dhokla. The combination makes a great breakfast for sure! 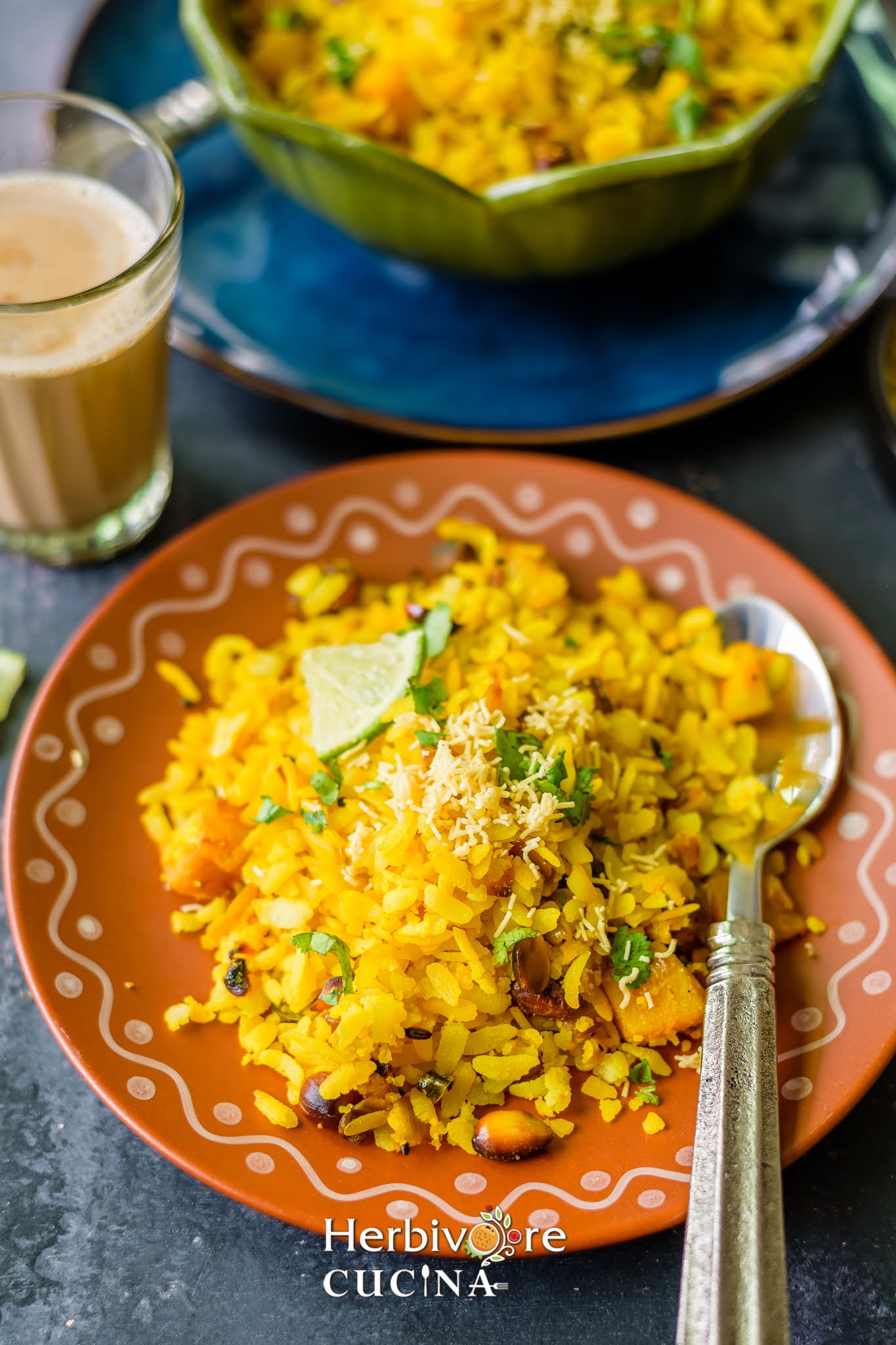 Cilantro and Sev to top 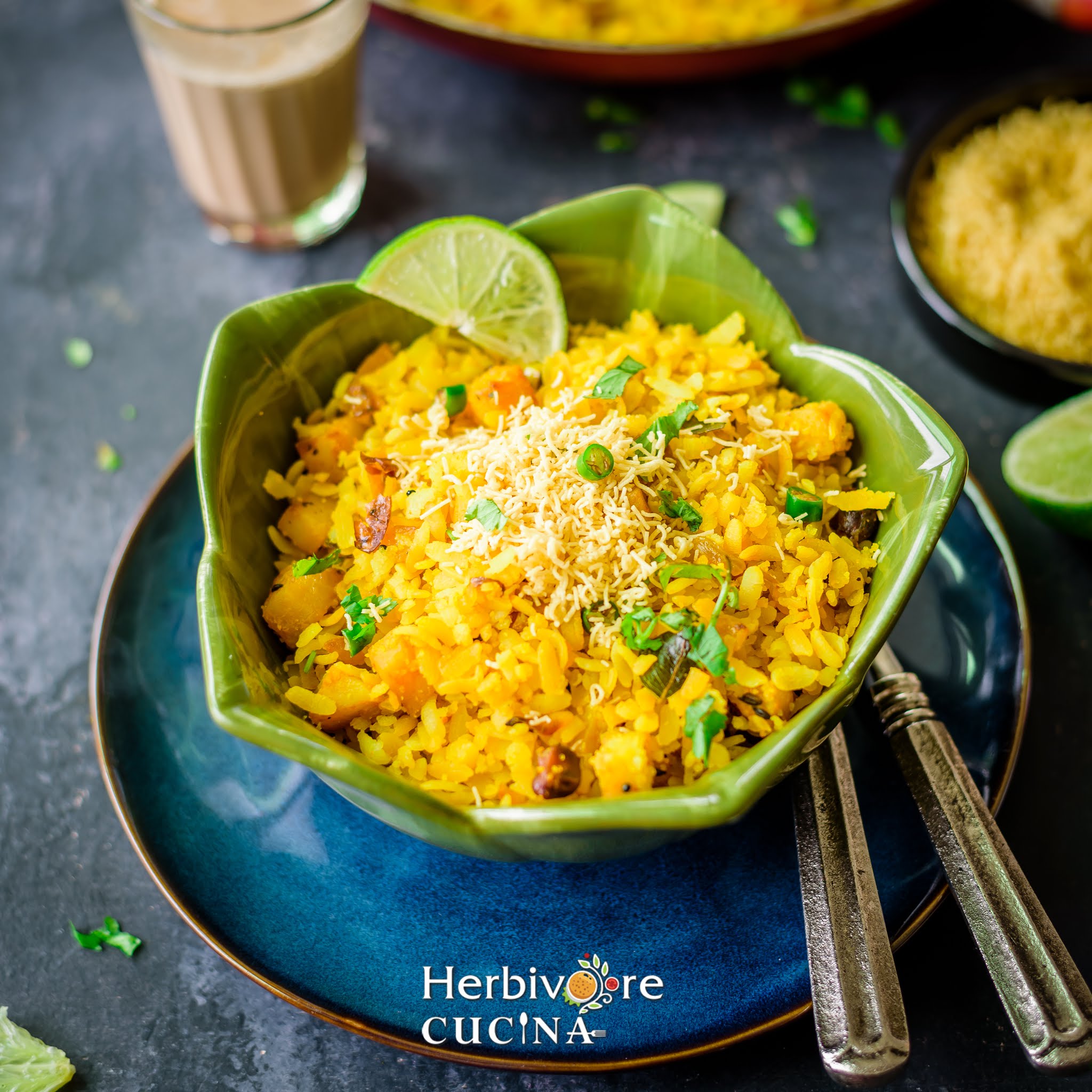 In a colander add the poha and rinse them in cold water. Set them aside to dry.

In a pan add oil. Once it is hot add mustard seeds, asafetida and cumin seeds. Let the mustard seeds pop. Then add green chili, roasted peanuts and curry leaves.

Add chopped onion and fry it for a minute. Add diced potato along with a pinch of salt mix well. Let the potato cook covered for 8-10 minutes. Stir a couple of times to avoid the pieces from sticking to each other.

In about 10 minutes the potato should be fully cooked. At that time add the poha, turmeric powder, remainder salt and sugar. Mix well and cook covered for 4-5 minutes. 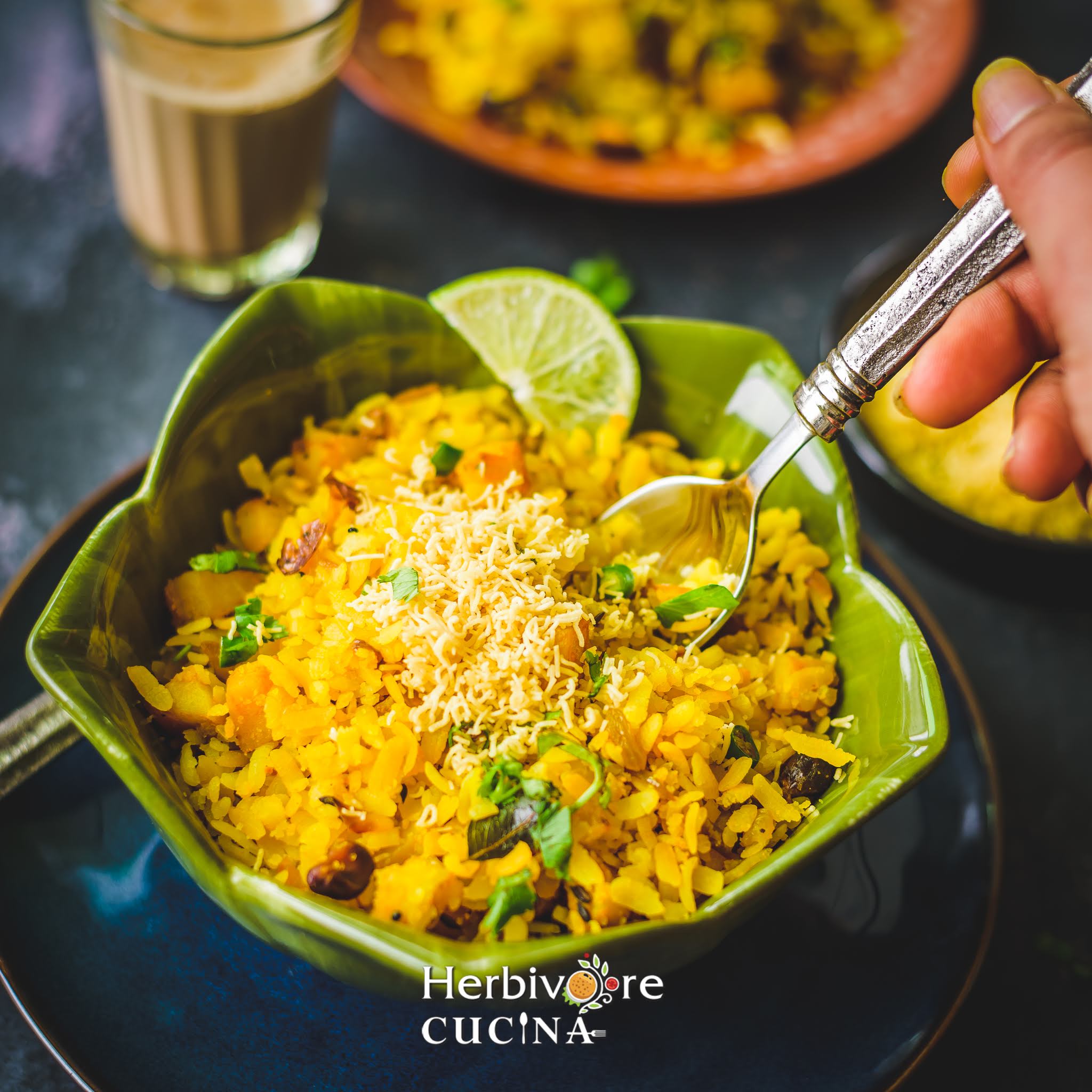 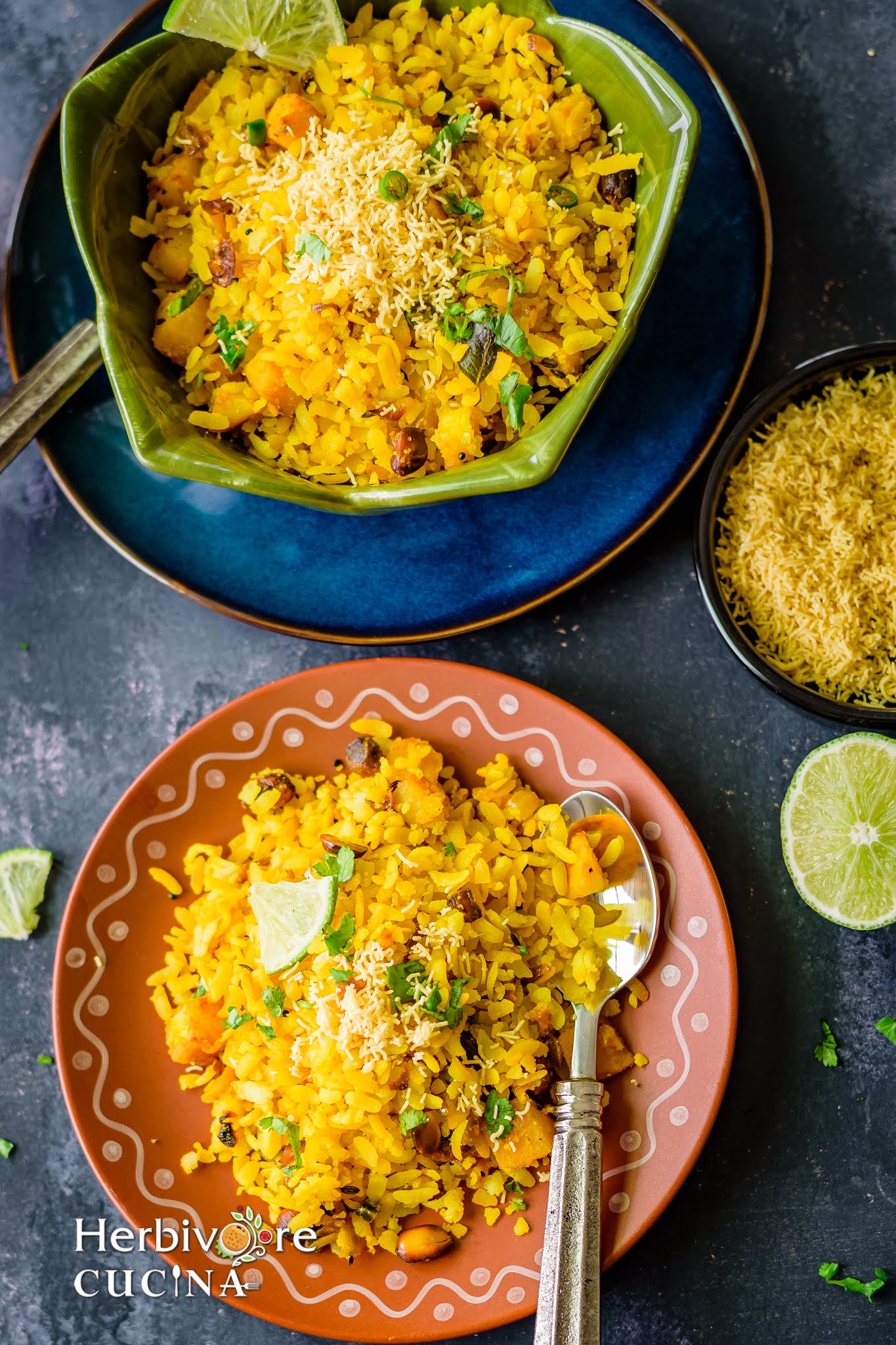