Misal (Marathi:मिसळ, meaning "mixture"), is a delicacy in the western Indian state of Maharashtra. The dish is eaten for breakfast or as a midday snack or meal, often as part of misal pav. It remains a very popular snack since it is easy to make, is relatively cheap and has good nutritional value. The dish originates from the area of Desh, Maharashtra. This popular Maharashtrian snack, enjoyed by scores of Mumbaikars, bagged top honours at the Foodie Hub Awards held in London in June 2015. The accolade went to Dadar eatery Aaswad Upahar located in Shivaji Park. The dish a regular favourite of the patrons received the 'The World’s Tastiest Vegetarian Dish' award.

There are several types of Misal Pav that you can devour in Maharashtra. Most of the places that serve this breakfast dish have their own version and proportion of mixing the ingredients. The spicy and fierce Kolhapuri Misal is a regular staple of Kolhapur, a place in Maharashtra. Then comes the milder Puneri Misal. This type of misal can be found in several eateries in Pune as well as famous joints on the Mumbai Pune Expressway. Then there is Sev Misal, where the mixed farsan is replaced with sev, the same one that goes into our bhel puri. Another famous variety is the Dahi Misal, same recipe as others, but topped with yogurt. 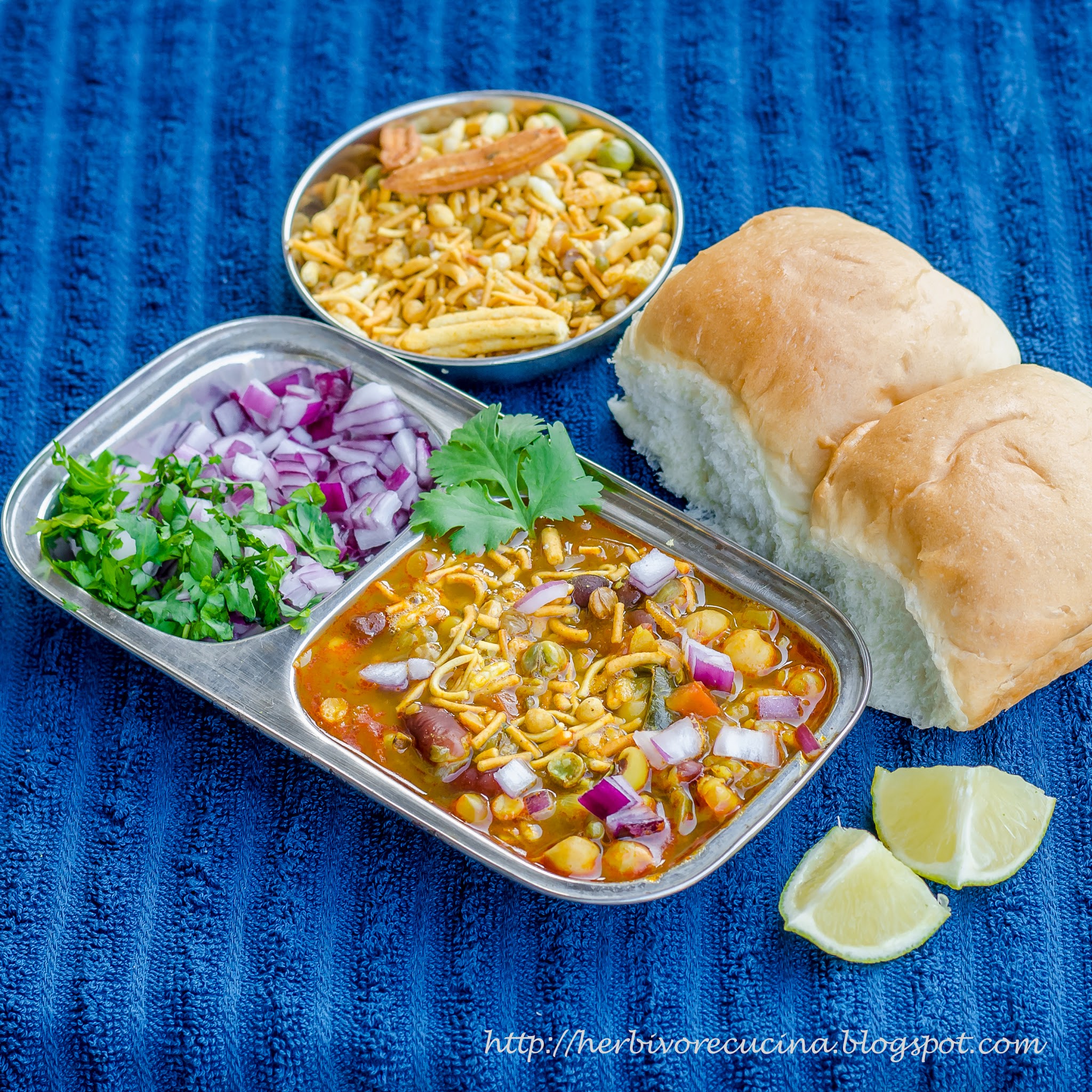 When you make misal at home, the choice of what all goes into the dish is purely yours. The method to make misal varies from household to household. This recipe is a simple one, not necessarily the most authentic. It comes together quickly as I would not want to spend hours to make breakfast alone. Instead of the traditional matki, I have used a combination of pulses: kidney beans, chole, brown chana, moong, matki and white peas. I simply put a bit of all of them in a bowl and used it without accurately measuring the proportions. You may choose to make misal out of just matki sprouts as well. Then again, the misal is made in a pressure cooker directly, instead of boiling the pulses and then mixing it with the masalas. The Goda masala used in the recipe is store bought from Mumbai. I love the flavors in this masala and always get a packet with me from India. If you do not have goda masala, you can substitute with equal proportion of garam masala. 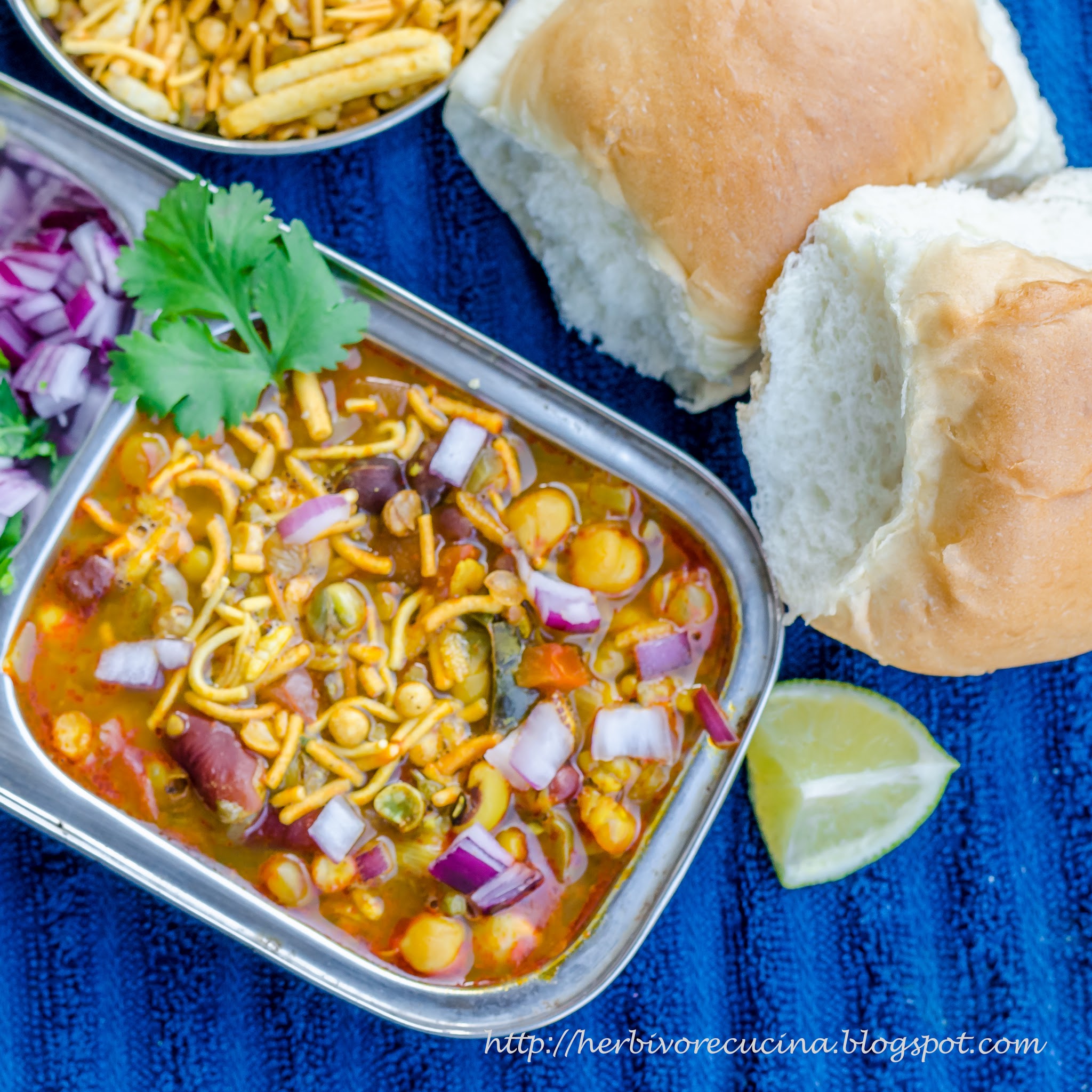 Any type of Mixed Farsan 2 cups 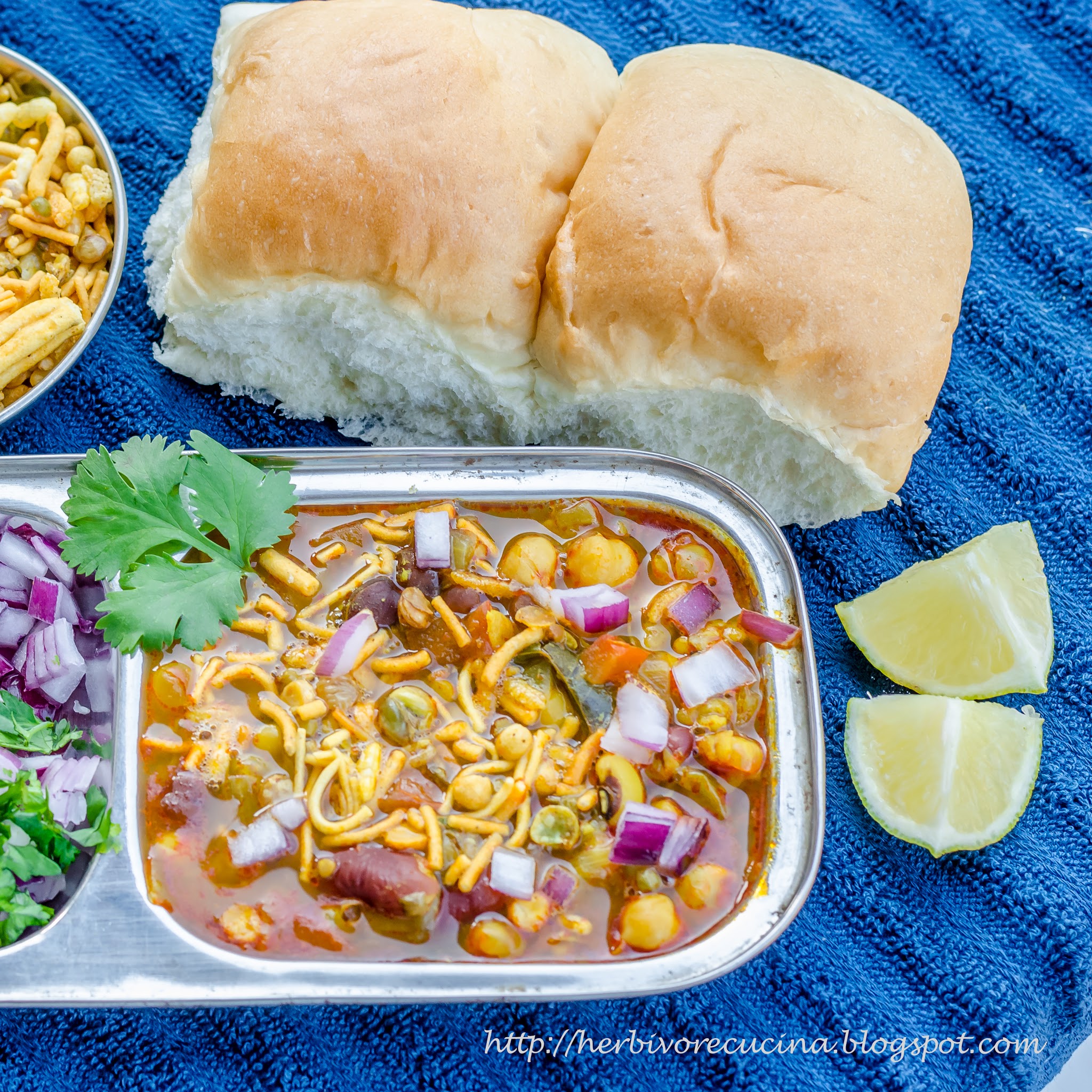 I have used a combination of pulses: kidney beans, chole, brown chana, moong, matki and white peas. I simply put a bit of all of them in a bowl and used it without accurately measuring the proportions. Wash and soak the mixed pulses using about 3 cups of water. Let them soak for 6-8 hours or overnight. Once soaked, drain the water and set aside. Heat oil in a pressure cooker and add the mustard seeds. Once they pop, add asafoetida and cumin seeds. Also add the spices and mix well. Next add the curry leaves and ginger garlic paste. Once the raw flavor of garlic goes away, add the onions. Saute the onions and cook them till they are soft. Once they are soft, add the tomatoes and mix well.

Once the tomatoes are soft in about 4-5 minutes, add the dhania jeera powder and goda masala. If you do not have goda masala, add the same amount of garam masala. Add the salt, red chili powder and turmeric powder. Once the masala cooks and the oil separates, add the mixed pulses and mix well. Then add 2 ½ cup of water and pressure cook for 3-4 whistles. 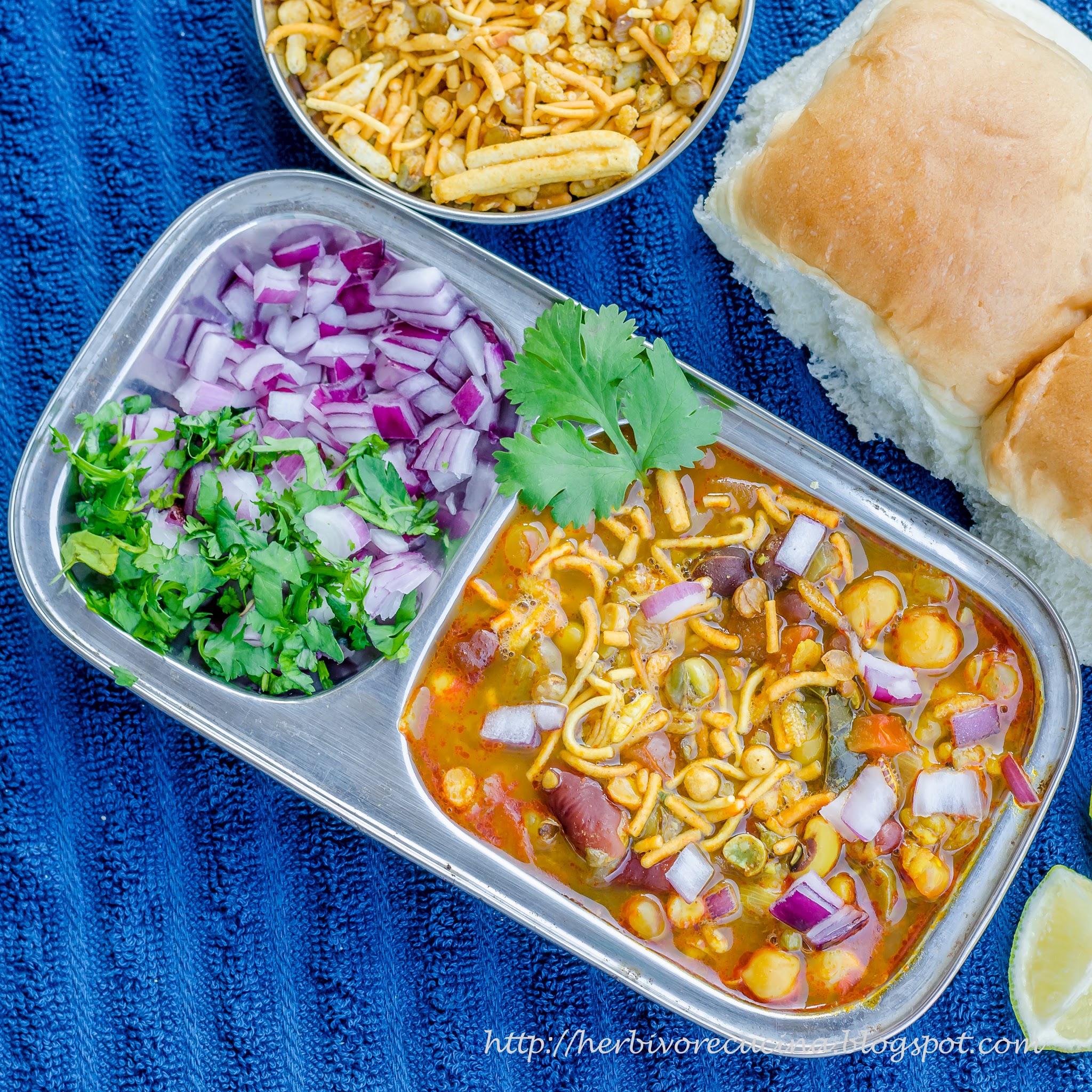 Turn down the flame and let the pressure subside. Open the lid and mix well. Meanwhile, prepare the sides for misal pav. Separate the pav and finely dice the onion, and mince the cilantro. To serve, put the misal in a bowl, top with some namkeen, onions and cilantro and serve with pav on the side. If you would like to bake your own pav, head straight to the recipe here. 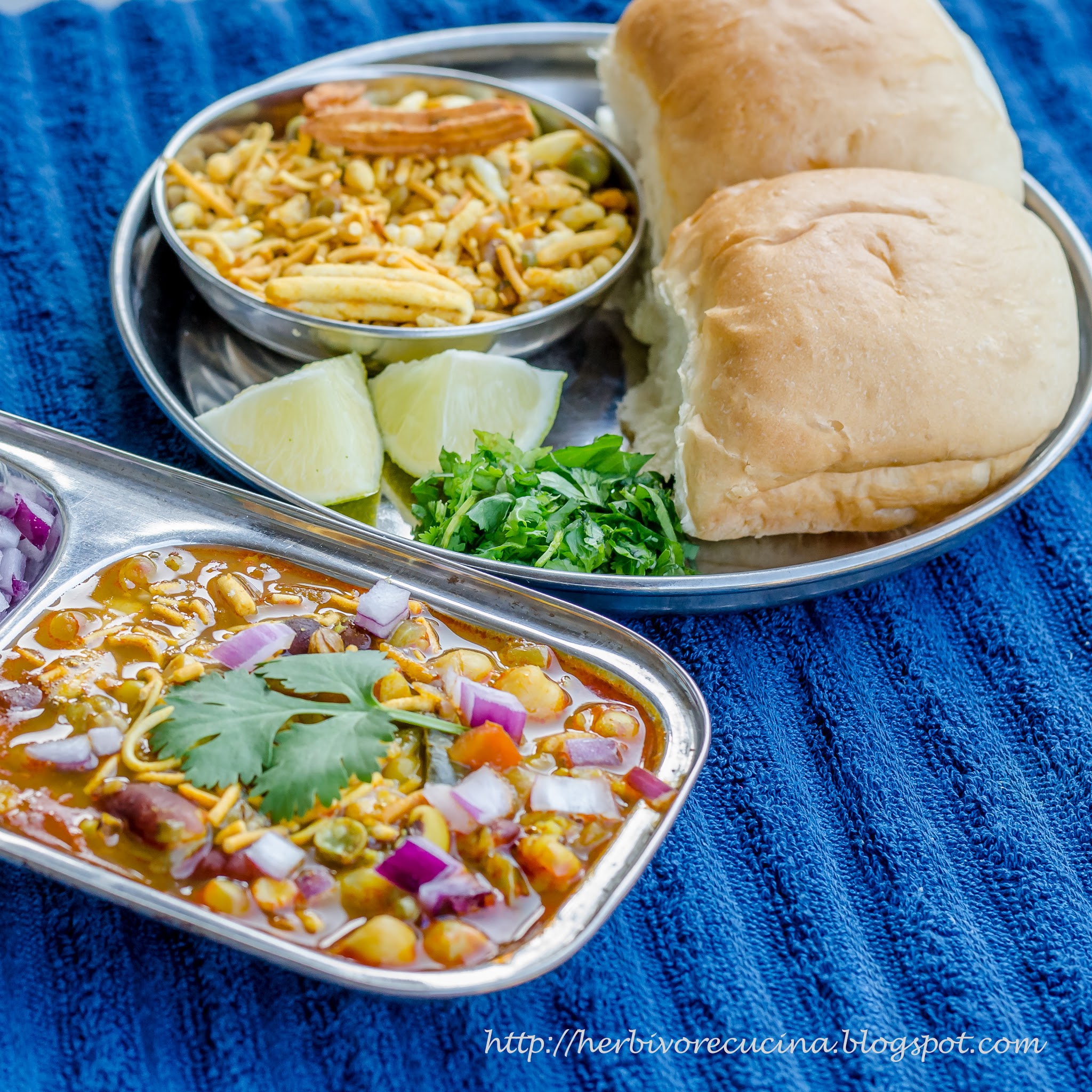 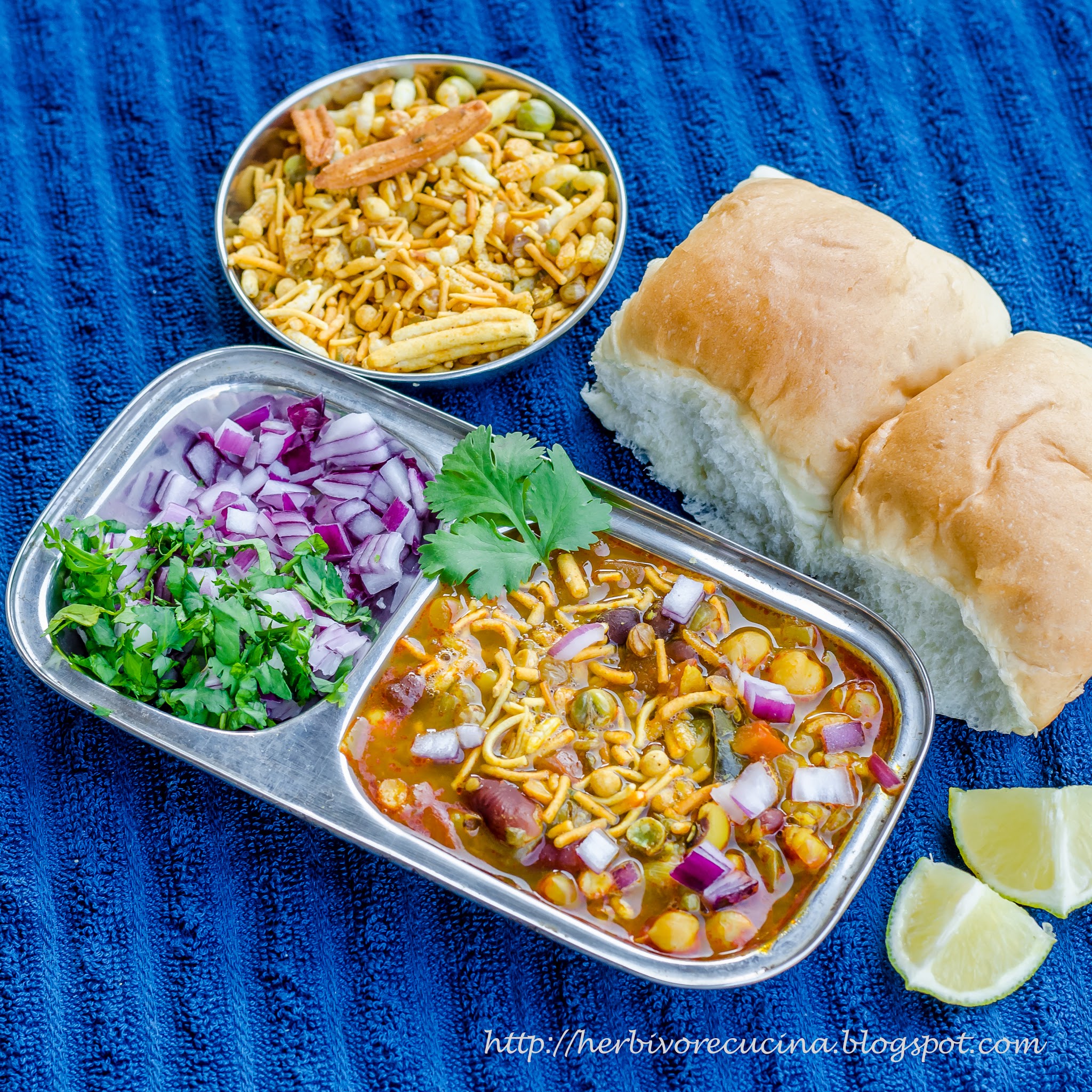 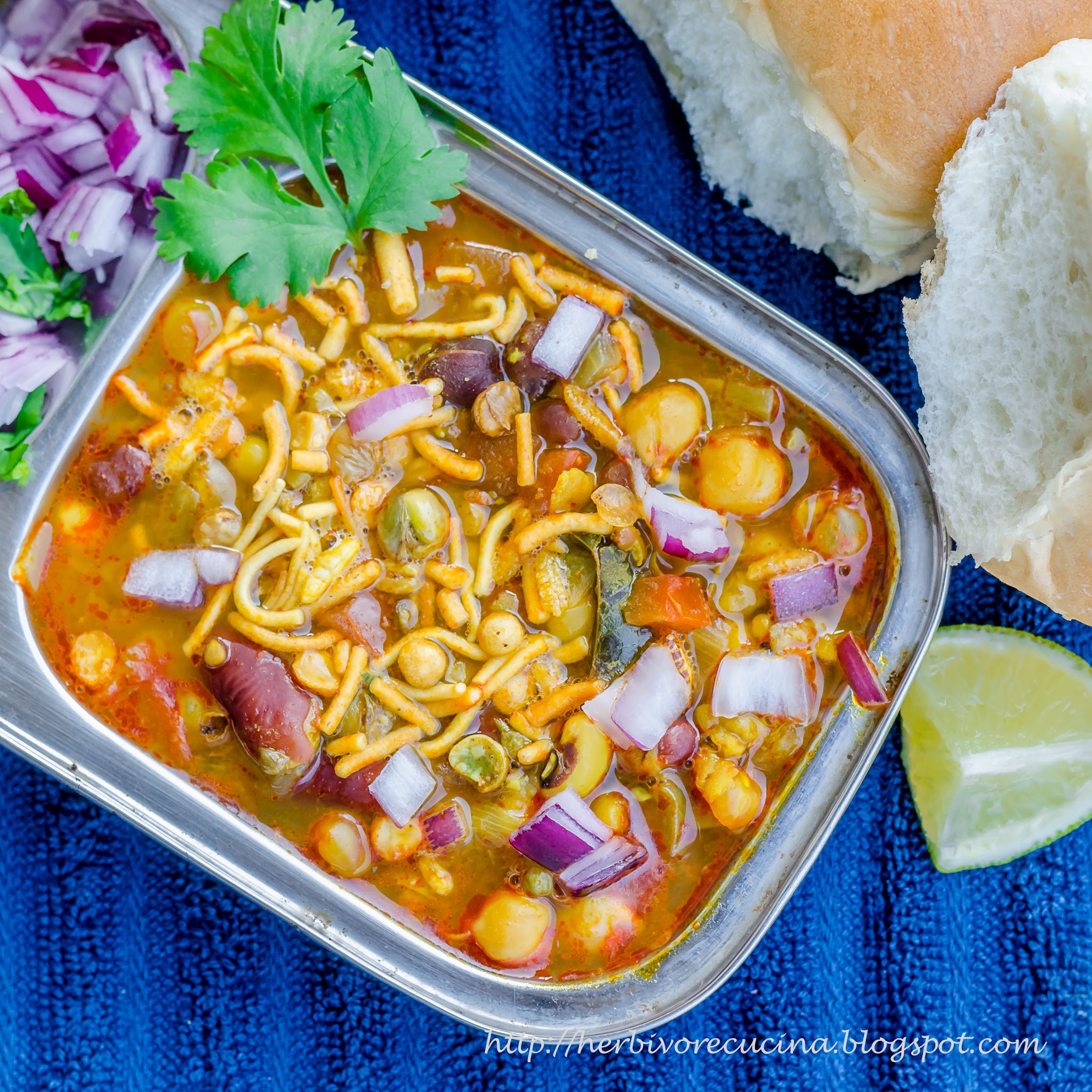